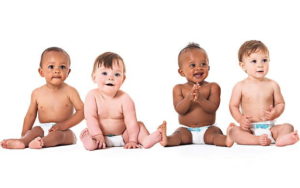 At the Children’s Research Lab at the University of Texas, a database is kept on thousands of families in the Austin area who have volunteered to be available for scholarly research. In 2006 Birgitte Vittrup recruited from the database about a hundred families, all of whom were Caucasian with a child 5 to 7 years old.

The goal of Vittrup’s study was to learn if typical children’s videos with multicultural storylines have any beneficial effect on children’s racial attitudes. Her first step was to give the children a Racial Attitude Measure, which asked such questions as:

During the test, the descriptive adjective “nice” was replaced with more than 20 other adjectives, like “dishonest,” “pretty,” “curious,” and “snobby.”

Vittrup sent a third of the families home with multiculturally themed videos for a week, such as an episode of Sesame Street in which characters visit an African-American family’s home, and an episode of Little Bill, where the entire neighborhood comes together to clean the local park.

In truth, Vittrup didn’t expect that children’s racial attitudes would change very much just from watching these videos. Prior research had shown that multicultural curricula in schools have far less impact than we intend them to—largely because the implicit message “We’re all friends” is too vague for young children to understand that it refers to skin color.

Yet Vittrup figured explicit conversations with parents could change that. So a second group of families got the videos, and Vittrup told these parents to use them as the jumping-off point for a discussion about interracial friendship. She provided a checklist of points to make, echoing the shows’ themes. “I really believed it was going to work,” Vittrup recalls.

The last third were also given the checklist of topics, but no videos. These parents were to discuss racial equality on their own, every night for five nights.

At this point, something interesting happened. Five families in the last group abruptly quit the study. Two directly told Vittrup, “We don’t want to have these conversations with our child. We don’t want to point out skin color.”

Vittrup was taken aback—these families volunteered knowing full well it was a study of children’s racial attitudes. Yet once they were aware that the study required talking openly about race, they started dropping out.

It was no surprise that in a liberal city like Austin, every parent was a welcoming multiculturalist, embracing diversity. But according to Vittrup’s entry surveys, hardly any of these white parents had ever talked to their children directly about race. They might have asserted vague principles—like “Everybody’s equal” or “God made all of us” or “Under the skin, we’re all the same”—but they’d almost never called attention to racial differences.

They wanted their children to grow up colorblind. But Vittrup’s first test of the kids revealed they weren’t colorblind at all. Asked how many white people are mean, these children commonly answered, “Almost none.” Asked how many blacks are mean, many answered, “Some,” or “A lot.” Even kids who attended diverse schools answered the questions this way.

More disturbing, Vittrup also asked all the kids a very blunt question: “Do your parents like black people?” Fourteen percent said outright, “No, my parents don’t like black people”; 38 percent of the kids answered, “I don’t know.” In this supposed race-free vacuum being created by parents, kids were left to improvise their own conclusions—many of which would be abhorrent to their parents.

Vittrup hoped the families she’d instructed to talk about race would follow through. After watching the videos, the families returned to the Children’s Research Lab for retesting. To Vittrup’s complete surprise, the three groups of children were statistically the same—none, as a group, had budged very much in their racial attitudes. At first glance, the study was a failure.

Combing through the parents’ study diaries, Vittrup realized why. Diary after diary revealed that the parents barely mentioned the checklist items. Many just couldn’t talk about race, and they quickly reverted to the vague “Everybody’s equal” phrasing.

Of all those Vittrup told to talk openly about interracial friendship, only six families managed to actually do so. And, for all six, their children dramatically improved their racial attitudes in a single week. Talking about race was clearly key. Reflecting later about the study, Vittrup said, “A lot of parents came to me afterwards and admitted they just didn’t know what to say to their kids, and they didn’t want the wrong thing coming out of the mouth of their kids.”

We all want our children to be unintimidated by differences and have the social skills necessary for a diverse world. The question is, do we make it worse, or do we make it better, by calling attention to race?

The election of President Barack Obama marked the beginning of a new era in race relations in the United States—but it didn’t resolve the question as to what we should tell children about race. Many parents have explicitly pointed out Obama’s brown skin to their young children, to reinforce the message that anyone can rise to become a leader, and anyone—regardless of skin color—can be a friend, be loved, and be admired.

Others think it’s better to say nothing at all about the president’s race or ethnicity—because saying something about it unavoidably teaches a child a racial construct. They worry that even a positive statement (“It’s wonderful that a black person can be president”) still encourages a child to see divisions within society. For the early formative years, at least, they believe we should let children know a time when skin color does not matter.

What parents say depends heavily on their own race: a 2007 study in the Journal of Marriage and Family found that out of 17,000 families with kindergartners, nonwhite parents are about three times more likely to discuss race than white parents; 75 percent of the latter never, or almost never, talk about race.

In our new book, NurtureShock, we argue that many modern strategies for nurturing children are backfiring—because key twists in the science have been overlooked. Small corrections in our thinking today could alter the character of society long term, one future citizen at a time. The way white families introduce the concept of race to their children is a prime example.

For decades, it was assumed that children see race only when society points it out to them. However, child-development researchers have increasingly begun to question that presumption. They argue that children see racial differences as much as they see the difference between pink and blue—but we tell kids that “pink” means for girls and “blue” is for boys. “White” and “black” are mysteries we leave them to figure out on their own.

It takes remarkably little for children to develop in-group preferences. Vittrup’s mentor at the University of Texas, Rebecca Bigler, ran an experiment in three preschool classrooms, where 4- and 5-year-olds were lined up and given T shirts. Half the kids were randomly given blue T shirts, half red. The children wore the shirts for three weeks. During that time, the teachers never mentioned their colors and never grouped the kids by shirt color.

The kids didn’t segregate in their behavior. They played with each other freely at recess. But when asked which color team was better to belong to, or which team might win a race, they chose their own color. They believed they were smarter than the other color. “The Reds never showed hatred for Blues,” Bigler observed. “It was more like, ‘Blues are fine, but not as good as us.’ ” When Reds were asked how many Reds were nice, they’d answer, “All of us.” Asked how many Blues were nice, they’d answer, “Some.” Some of the Blues were mean, and some were dumb—but not the Reds.

Bigler’s experiment seems to show how children will use whatever you give them to create divisions—seeming to confirm that race becomes an issue only if we make it an issue. So why does Bigler think it’s important to talk to children about race as early as the age of 3?

Her reasoning is that kids are developmentally prone to in-group favoritism; they’re going to form these preferences on their own. Children naturally try to categorize everything, and the attribute they rely on is that which is the most clearly visible.

We might imagine we’re creating color-blind environments for children, but differences in skin color or hair or weight are like differences in gender—they’re plainly visible. Even if no teacher or parent mentions race, kids will use skin color on their own, the same way they use T-shirt colors. Bigler contends that children extend their shared appearances much further—believing that those who look similar to them enjoy the same things they do. Anything a child doesn’t like thus belongs to those who look the least similar to him. The spontaneous tendency to assume your group shares characteristics—such as niceness, or smarts—is called essentialism.

Click here to link to full article and continue reading.